Taking a little inspiration from Dean McGee, I did a Dean McGee style table of the largest shared autosomal segments from the tiny segment
study of HAM DNA Group #1 -  I1-M253.

Basically, the autosomal DNA testing companies set a low threshold, meaning they usually do not show much beyond 5th cousins for the
autosomal DNA. As most of you know the Y-DNA goes much further back.

We have had folks in our Y-DNA group upload their autosomal DNA to GEDMatch, and I have lowered the thresholds by using GEDMatch utilities.

The results from the largest shared segments roughly follow the Y-DNA, except that the autosomal DNA has totally separated out the line of our
William HAM, Sr. of Grayson County. You can almost make out his three sons.

Here, the problem with this autosomal tree is that that there has been no attempt to separate out the males and females. Also, some folks
descend more than once, which makes the autosomal segments sometimes appear to be larger than they normally would be.

First off is to create a table of the largest autosomal shared segments from the tiny segment study. FTDNA, Ancestry, and GEDMatch have a lower threshold of 7 cMs, and that cuts us off at about the 5th or 6th cousin level. I used the utilities at GEDMatch to lower the threshold to one (1.0) centimorgans (cMs).

Then, I created a program to create a table of the largest shared segments for the autosomal DNA of the HAM Group #1 autosomal participants.


I then wanted to graph that out, so I had to invent some form of Genetic Distance for the autosomal DNA.

For the purpose of creating a tree, I used 100/(x) for genetic Distance, where 'x' is given in cMs.
My threshold values were down to 1 cM, but I suppose that for less than one, I could use 100/SQRT(x)

As usual, I used the kitsch program from Phylip to sort the resulting tree. I removed M804xxx (Lauren), because she does not have valid match here, even though she is related to Lynette.  Here, Lauren matches only 9 of the HAM kits, and 5 of those kits are on the HLA region of chromosome 6 (not a valid match).
Basically, with Lauren included, the resulting tree wanted to pull Lynette out of the Patrick County HAM group and put it outside to Lauren's group.
So, Lauren was removed for the purposes of creating the atDNA genetic tree for the HAM surname group.

Update March, 31. 2018: What I have found regarding the problem with the kit for Lauren (M804xxx) is that it's a "vendor conversion" problem at GEDMatch.
The problem has to do with SNP overlays, as I have been informed by Andreas West. Basically, you currently can use the "One to One' comparison utility at GEDMatch and lower the number of SNPs to "250" when you lower the number of cMs to '1.' That much greatly improves the comparison to the 23AndMe vendor (kits numbered Mxxxx at GEDMatch).

One thing that the tree points out is that our NPE to the LOVIN surname apparently came out of Amelia County, VA. We have no Y-DNA from Amelia County, just autosomal DNA. My guess is that his ancestor died in war and he was adopted. His line is more recently (since 1800) from Wayne County, NC, and he doe not match the Y-DNA of Wayne County HAM lines.

I am fairly happy with this initial tree. Even though I did not separate out the male and female lines, the tree does separate out the various lines in separate geographic areas. Also the timeline suggests that my Grayson County, VA line separated from the line in Somerset later on, and that the Amelia County HAM line separated out earlier (As does the Franklin County, NC HAM line). 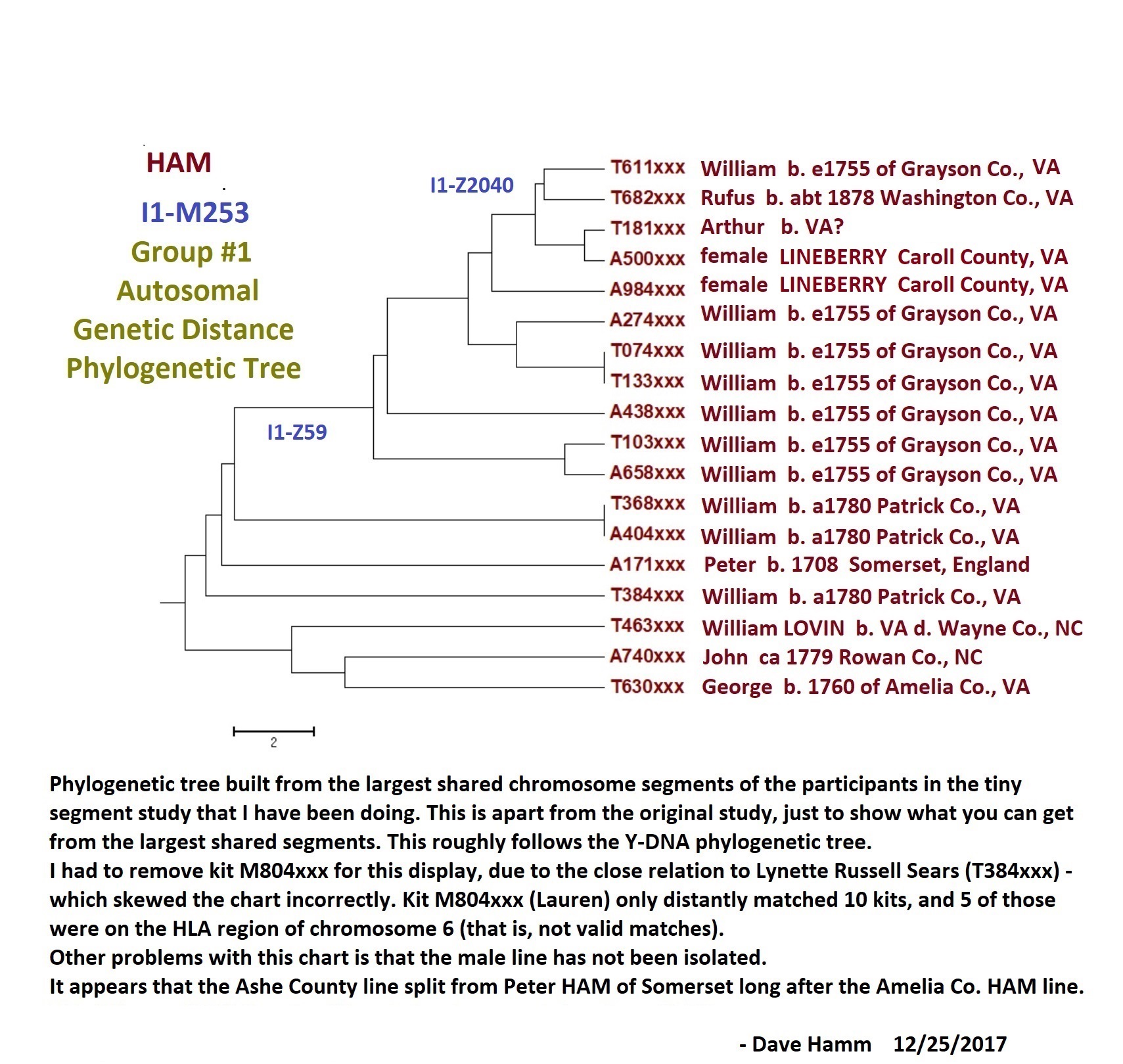 Andrew Millard suggested that because the Genetic Distance value of 1/cMs is not linear, I might try an exponential equation of the form -ln(cm/7200).

That formula suggestion was tried that, and I was not real happy with the results. The Genetic Distance did not correspond well to cousin level, and the upper limit for data greater than 1 cM appeared to be about 8 (generations), even for the results for Lauren Shutt (M804xxx).

Andrew had also suggested that I do not use kitsch, but I have not yet found different program that works with Genetic Distance.

So, here, I have used the equation for the half life decay rate, typically used in radioactive decay under the presumption that we are looking at Half Identical Regions (HIRs). The results mostly returned the expected cousin level (or number of generations).

Solvng for t, Hypothetical Genetic Distance given as:

- where "ln" is the natural log function
Largest segment (i.e., most obvious) for mother/son or parental half life calculations (for size) is:

and for parent/child half life decay:

Below is a description of the half life decay rate calculations, and the resulting phylogenetic tree.

For my data, the resulting sizes given by the decay rate are about what is expected for the cousin level, or number of generations.

Personally I am aware of some of the endogamy, and that the largest segment is not always the segment that we have an interest in (to trace the HAM male lineage). Otherwise, Excess IBD regions have not yet been removed from these tables. 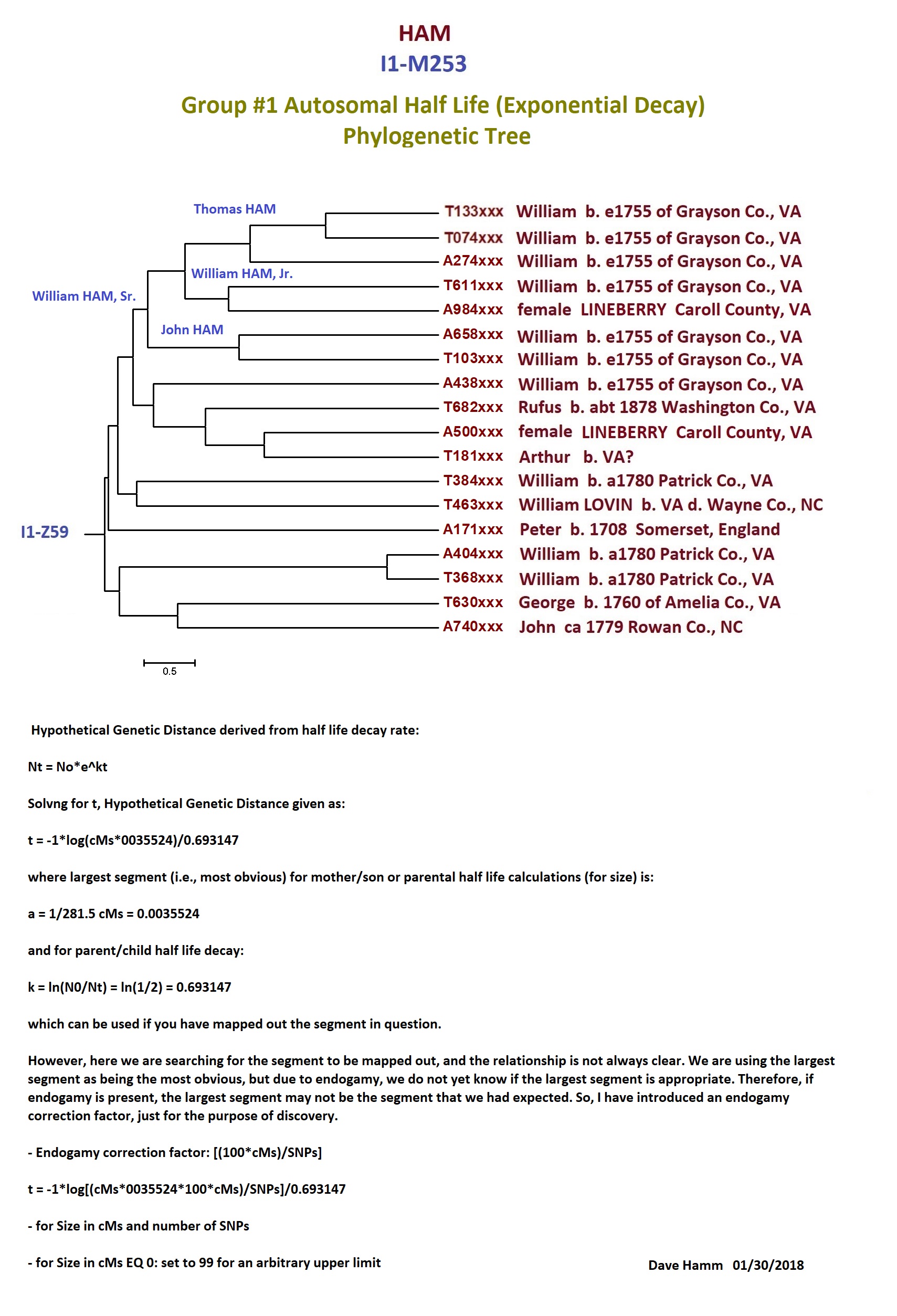 The resulting half life decay rate tree moves the LOVIN NPE more toward the Patrick County, VA line whereas the previous tree (above) had him closer to Amelia County, VA. This exponential decay tree appears to separate out the sons of William HAM, Sr. better than the previous tree (GD=1/cMs, above), and also breaks up the LINEBERRY female autosomal DNA.

My thoughts are that it would be useful to concatenate the trees by using the genetic distance of each segment, not just the largest segment. Concatenating the trees may also be useful for the triad study as well.

A404xxx Jamison  relates to Sintha HAM, daughter of Jordan HAM of Patrick County, VA.
The documentation implies Jamison is Lynette's 4th cousin (T384xxx via a female)
Jamison is the son of  C_Godby (T368xxx)

A740xxx Martha Jane  descends from the orphans of John Hamm in Rowan
County, NC (1779), supposedly in Rowan Co. & later Iredell Co.
before moving to TN in the 1870s. Connection to Group #1 is UNKNOWN

How to Read HAM DNA Phylograms    (video)
Back to HAM Country